I’m pretty sure my grandparents had this.

Over the years, I’ve found that the blog posts for the Giveaway go much more smoothly if they have a theme. Otherwise, let’s be honest, I’m in my 50’s and have started to repeat myself, so you’d just be subjected to my memories of traveling home from my grandparents’ house on Christmas Eve, ad nauseam. I really liked doing last year’s look at Christmas through the (canonical) years, but as much fun as it was, it was also time-consuming, and I didn’t want to repeat it again so soon. So, I was stuck.

Until my husband came upstairs.

My husband loves cooking. He is a much better cook than I am, and every once in awhile, he gets it into his head to try a new recipe. Puddings–the old fashioned kind, not the “jello” kind–seem to be the thing this season. Since some of his maternal ancestors came from Yorkshire, and his family retains some of their customs, it’s a nice continuation. Plus, he’s always so proud of his creations. Unfortunately for him, I have all sorts of “issues” when it comes to food. Taste, texture, smell…this is why I stick with the holiday cheese ball. But I am also a loyal, loving wife, so I did try some.

This kind. (Although this is from 31Daily.com; my husband’s broke when he took it out of the bundt pan)

Guys, it tastes like the inside of a fig newton–tiny seeds and all.

Y’all Gen-Xers knew this was coming.

And I couldn’t taste the alcohol in the bourbon-vanilla glaze. All in all, it was a success. He’s making more tonight for the family reunions, and I now have a Giveaway Theme–

FOOD IN THE CANON

Because there is, indeed, food at 221B Baker Street. Although BBC Sherlock reminds Molly that he doesn’t eat when he’s working, and Watson tells us he has known Holmes to “faint from inanition,” human beings have to eat to stay alive, and as both the Great Detective, his doctor, Mrs. Hudson–and Mycroft–are still with us…..

(From “I Hear of Sherlock Everywhere”)

Since I have to work today–and feed 3 kids before I go–today’s question will be a short one.

Is “figgy pudding” mentioned in the Canon?

At this point, I don’t even know the answer! We shall find out together! Send your answer to me via blog comment, private message me via the Well-Read Sherlockian Facebook page, or private message me personally if we are FB friends “in real life.” Whatever that is. This is going to be a fairly “book heavy” Giveaway, and the first prize is a Sherlockian research classic:

And, if you wish to try to make a “figgy pudding” for your family…

The recipe my husband used….. 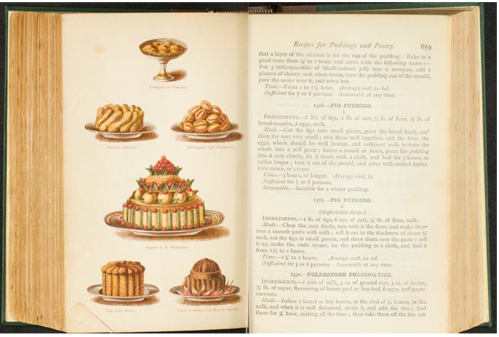 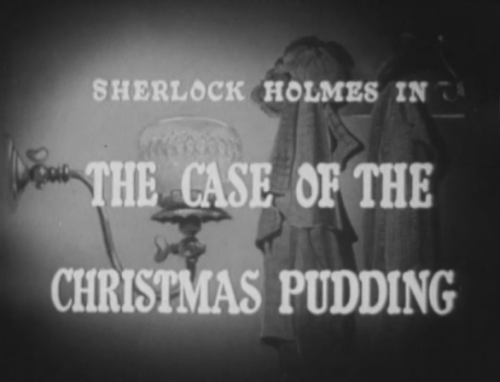 Ok, this was a fun question! As I said, I had no idea whether or not a “figgy pudding” was mentioned in the Canon–but I suspected it wasn’t. And so I–and the several commenters who answered “no” were right…..kind of.

Because it seems that, up until Mrs. Beeton’s Household Management came out in 1861, people did not typically put actual figs into their “figgy puddings.” I’m sure some families did, but the usual fruit was the “plum,” which, in its turn, actually featured raisins. And, as it turns out–and as virtually everyone mentioned, the sight of the Black Pearl of the Borgias nestled in plaster reminded Watson of a “plum in a pudding.”

The winner of the drawing was T. Rick Jones, who, in his answer, mentioned that the Ronald Howard Sherlock Holmes series includes an episode entitled–well, as you can see, “The Case of the Christmas Pudding.” I’ve put a link to it on the Well-Read Sherlockian Facebook page.

Congratulations to Mr. Jones, and thanks to all who entered. The game is now officially afoot!