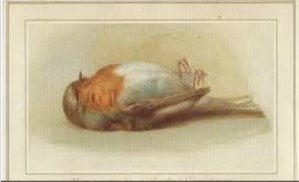 I think it’s safe to say that Dr. Watson was not in the Christmas spirit during this time. Nor, I assume did Scotland Yard. Everywhere they looked, they saw reminders that Sherlock Holmes was no longer with them.

With Watson, of course, it was more personal. No more cryptic telegrams. No more middle-of-the-night summonses or crazy hansom rides through London streets. No more brilliant deductions, no more violin, no more strange smells, no more reason to happen by Baker-street.  When the paper reported a “mysterious explosion” near Regent’s Park, he nearly wept because this time, he could be certain it had nothing to do with Sherlock Holmes.** 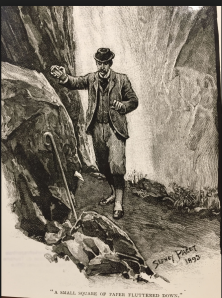 While British law enforcement likely “moved on” more quickly, there were no doubt many times that they, and the public they served, wished that Sherlock Holmes was still among the living. Here are a few “Christmas time” cases which may well have gone unsolved thanks to the tragedy at Reichenbach Falls.***

On Tuesday evening, shortly before 7 o’clock, a singular discovery was made by the railway-station officials at Hereford, shortly after the arrival of the 3.35 pm train from Manchester to Bristol. From statements made by the engine driver, the guard proceeded to examine the various compartments of the train and found the door of one of the third-class carriages swinging on its hinges. Inside the carriage he found a man’s black felt hat and a dark blue overcoat, but the owner was nowhere to be found. This circumstance in itself would have excited but little curiosity had it not been for an incident which had previously occurred during the journey, and which would seem to involve the discovery with dark significance. Shortly after the train left Shrewsbury the passengers were somewhat alarmed to find the train coming to a dead stop though many miles away from any of the stations en route. Immediately afterwards the voice of the guard was heard shouting, “Who is it that keeps ringing that bell?” The question was repeated by someone who walked along the metals the entire length of the train. Receiving no answer, and imagining someone had been signalling the train to stop out of pure mischief, the man muttered something to the effect that whoever it was he deserved “a good hiding,” and went back seemingly in the direction of the engine. A fresh start was made, and during the rest of the journey to Hereford, the passengers in the next carriage to the one in which the hat and coat were found repeatedly heard something banging in the next carriage. Being very dark, showery, and cold, however, none of them felt inclined to open the window and ascertain if there was anything wrong. There were no cries or sounds of disturbance, and so the matter was not given a second thought until their arrival at Hereford. So far as we can learn, there was nothing in the coat pockets to indicate who was the owner, but inside the hat were the name and address of a firm of hatters in North Shields. It was thought that the things may have belonged to some seafaring man journeying from North Shields to Cardiff or Bristol, whose disappearance from the train, coupled with the mysterious twitching of the alarum bell, has created a considerable sensation. The carriage in which the articles of clothing were discovered bore no traces of any struggle or disturbance. The right hand door fronting the engine was locked, but it was evident that an attempt had been made to open it, as the handle had been twisted round. Whether the carriage contained one or more passengers on leaving Shrewsbury is also unknown. In fact, the whole affair seems shrouded in mystery.–South Wales Daily News,  December 2, 1891.

MYSTEROUS DISAPPEARANCE.–The disappearance of a young married woman named Spurgeon from Braintree is occupying the close attraction of the Essex police. The missing woman, who had been married about two years, left her husband on December 13 without any apparent reason, except that her mind was unhinged by religious mania, was seen crossing the fields in the direction of the River Blackwater, and nothing has been seen or heard of her since. The river has been dragged, and the woods and ponds in the neighbourhood have been searched. As yet not the slightest clue to the mystery has been found.–The Morning Post, December 23, 1892

Great excitement prevailed on Saturday in the neighbourhood of Henley-on-Thames on its becoming known that a mysterious murder had been committed on the preceding evening at Lambridge, a lonely wood situated not far from the town. Lambridge House is occupied by Mr. Mash, who carried on the business of a fruiterer in Glasshouse-street, Piccadilly-circus, and is one and a half mile from Henley by the footpath. It stands quite alone, no other house being within a mile. The only adult occupant of the mansion was Mr. Mash was away (as he is during the greater part of the week) was the housekeeper, Miss Kate Dungey, who was 30 years of age, and who had held the position of governess to Mr. Mash’s children. It is a fortnight since Mr. Mash was last at Lambridge House. About five o’clock on Friday evening George Dawson, who was left in charge of the small model farm, left the house, and about eight o’clock two lads who sleep there when the family are away went up to the house as usual. They were, however, unable to gain admittance, although they noticed that lights were burning in the front room. They stayed about endeavouring to gain entrance until nearly ten o’clock, when they returned home and found Dawson. The latter went back, and entering the house by a window noticed that there were signs of a struggle having taken place. The boys having told him that they had heard, on going to the house, a sound like scuffling in the wood, he instituted a search, and shortly afterwards, within a few hundred yards of the house, came upon the body of Miss Dungey with her head and face terribly injured. Close by was a broken hedge-stick and a poker. Dawson immediately communicated with the police, and Superintendent Keel and a constable were promptly on the scene. The police have thoroughly scoured the neighbourhood, but up to last evening had not succeeded in obtaining a clue to the perpetrators of the crime. Four or five sovereigns were found in a handbag belonging to Miss Dungey, and nothing had been touched in the house, not even the watch on the sitting-room chair. The lady’s pocket had, however, been rifled, and this, it is suggested, would go to show that the murderer wanted something which Miss Dungey possessed.–Morning Post, December 11, 1893.

Murder doesn’t stop for the holidays. And if you win today’s drawing, you can expect new murders every three months. Fictional ones. That get solved. By detectives created by today’s best-known and upcoming authors–with an occasional classic thrown in! The Strand still exists–in title, if not in form, and today’s prize will be a one-year subscription. 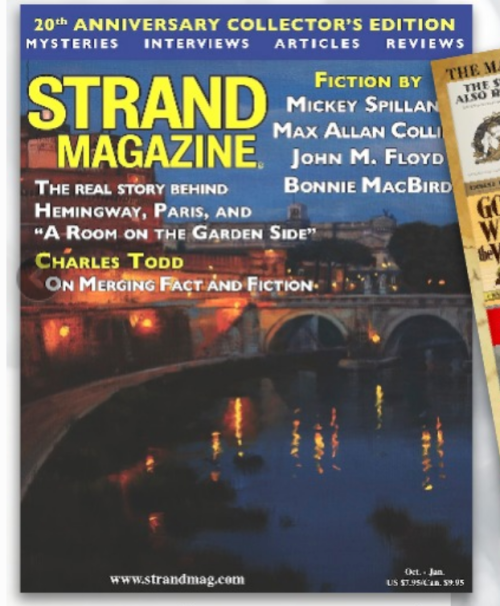 What do you think Holmes did during The Great Hiatus? Did he travel around, visiting Tibet and France, gaining knowledge and doing experiments, as he told Watson? Did he hunt down and capture (or kill) the rest of Moriarty’s network (as BBC Sherlock surmises), did he spy for Mycroft? Hang out with Irene Adler Norton in Montenegro? Or do something else entirely?

Send your ideas in via blog comment or FB message–and don’t be afraid to let your imagination run!

*Why a dead bird on a Christmas card? Follow this link: hyperallergic.com/344920/why-are-there-dead-birds-on-victorian-xmas-cards/

***Note: They may well now be solved; I haven’t had time to check. But when they first made the news, it wasn’t looking good.