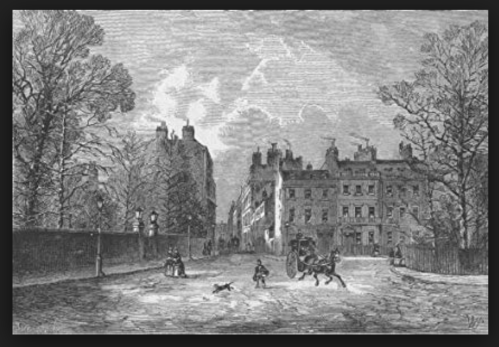 Well, as I am sure you’ve been able to tell, I’ve been following Christmas year-by-year, beginning the year Sherlock Holmes and Dr. Watson met. I was thinking of doing a recipe this time, or maybe a look at Christmas cards. Maybe something about blackmail. And then I found…this. This very strange story, in the 23 December, 1886 issue of the St. James Gazette. If Sherlock Holmes had read it–and we do know he kept up with the London papers–how would he see it? As a piece of black humour? Satire? A holiday homage to DeQuincey? As a creepy story? Or perhaps as a…confession? See what you think.

THE MURDER IN BERKLEY SQUARE.

A DREAM OF A LONG-PAST CHRISTMAS EVE.

At rest by my good sea-coal fire, my pipe at hand, the curtains of my room  pinned together with pen-nibs, I dream back to a Christmas Eve of the long-ago. The sleet flings itself at the windows, to fall back exhausted like–like–like salmon trying to mount a caul. Far below, the waits are singing in the street. It will be precisely–yers on Friday night since I throttled the waits and buried them in Berkeley-square. I have made allowances for the waits ever since; fearing too often that I have a crime on my conscience. Did I do right? After all, may not these men have had their feelings?

It is so long ago that I cannot be expected to remember all the details. Indeed, I am never quite sure whether there were two of them or three. There wee certainly two, and I remember that I took the man with the beard first. The incident would have made more impression on me had there been any talk about it. So far as I could discover, it never got into the papers. The police did not seem to think it any affair of theirs, though one of them must have guessed wha I invited the waits upstairs. He saw me open the door to them; he was aware that this was their third visit in a week; and only the night before he had heard me shout a warning to them from my study-window. But of course the police must allow themselves a certain amount o discretion in the performance of their duties. Then there was the gentleman of the next door but two, who ran against me just as I was toppling the second body over the railing. We were not acquainted, but I knew him as a man who had flunga flower-pot at the waits the night before. He stopped short when he saw the body (it had rolled out of the sofa-rug), and looked at me suspiciously. “He is one of the waits,” I said. “I beg your pardon,” he replied, “I did not understand.” When he had passed a few yards he turned round. “Better cover him up,” he said, or people will talk.” Then he strolled away, an air from “The Grand Duchess” lightly trolling from his lips. We still meet occasionally, and nod if no one is looking.

I am going too fast, however. What I meant to say was that the murder was premeditated. In the case of a reprehensible murder, I know this would be considered an aggravation of the offence. Of course it is an open question whether all murders are not reprehensible; but let that pass. To my own mind I should have been indeed deserving of punishment had I rushed out and slain the waits in a moment of fury. If one were to give way to his passion every time he is interrupted in his work or his sleep by bawlers–be they waits or Socialists or what not–our thoroughfares would soon be choked with the dead. No one values human life or understands its sacredness more than I do. I merely say that  there may be times when  man, having stood a great deal and thought it over calmly, is justified in taking the law into his own hands–always supposing he can do it decently, quietly, and without scandal. I am a physician with a practice which keeps me hard at work until late in the evening. What repose I get is late at night, after my household have retired to rest; and it is my custom to sit up into the small hours, thinking over my more dangerous cases. Often I have been rung up just as I had got into bed and had to go off to see a patient. I never grudged that. But the epidemic of waits was another matter. It broke out early in December, and every other night or so these torments came in the stillest hours and burst into song beneath my windows. They made me nervous. I was more wretched on the nights they did not come than on the nights they did; for I had taken to listening for them, and was never sure they had gone into another locality before four o’clock in the morning. As for their songs, they were more like music-hall ditties than Christmas carols. So one morning–it was, I think, the 23rd of December–I warned them fairly, fully, and with particulars, of what would happen if they disturbed me again. Having given them this warning, can it be said that I was to blame–at least, to any considerable extent? Surely not; especially at this time of year, when charity is in the very air and we are all expected to be lenient one to another. I do not pretend to be faultless.

Christmas Eve had worn into Christmas morning, before the waits  arrived on that fateful occasion. I opened the window–if my memory does not deceive me–at once, and looked down at them. I could not swear to their being the persons whom I had warned the night before. Perhaps I should have made sure of this. But in any case these were practised waits. Their whine rushed in at my open window with a vigour that proved them no tyros. Besides, the night was a cold one for lingering long at an open casement. I nodded pleasantly to them, and pointed to my door. Then I ran downstairs and let them in. They came up to the study with me.As I have said, the lapse of time prevents me remembering how many of them there were; three, I fancy. At all events, I took them into my ante room and strangled them one by one. They went  off quite peaceably; the only difficulty was in the disposal of the bodies. I thought of laying them on the kerbstone or in different passages; but I was afraid the  police might not see that they were waits, in which case I might be put to inconvenience. So I took a spade, and, climbing into the gardens of Berkeley-square, dug two (or three) large holes. Then I carried the bodies to the place in my rug one at a time, shoved them in, and covered them up. A close observer might have noticed in that part of the garden, for some time after, a small mound, such as might be made by an elbow under the bedclothes. Nobody, however, seems to have descried it, and yet I see it often even now in my dreams.

The worst of the affair’s attracting no attention is that it does not serve as a warning to other waits. They were never harder at it than they have been this year. However, I have done what I could, and I have no intention of making an annual thing of it. I may have been wrong, but I acted for the best; and, after all, motive is everything in these cases.

Of course the murderer wouldn’t actually be a physician living in Berkeley Square. But the bones of the story–could they have been true? It’s interesting to think about the “what if’s.” 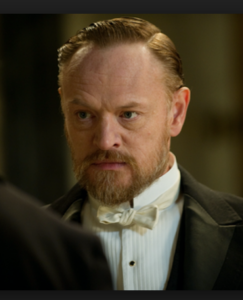 I was perfectly sane before those blasted waits….

Every story in the Canon involves people with secrets–and secrets have a way of coming out, particularly when Sherlock Holmes gets involved. The 3 adventures Baring-Gould says take place in 1886–“The Resident Patient,” “The Noble Bachelor,” and “The Second Stain” all feature people trying to hide their pasts. Who are they–and what are they trying to hide?

Like our hero, Sherlockians are all about “what really happened,” and have been for well over a century now. Today’s prize is a classic in that field: 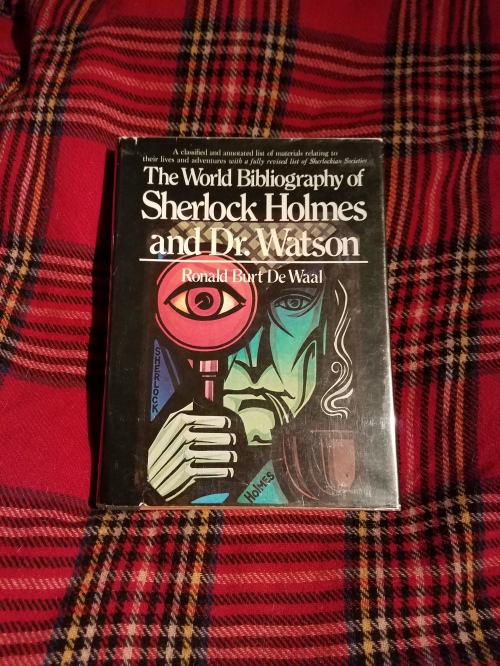 Ronald Burt DeWaal, BSI (“The Wigmore Street Post”) who died this past July, was a librarian, exhibit curator, and professor whose most famous Sherlockian achievement is his bibliography of all known material relating to Sherlock Holmes–as of 1974. He followed it with 1980’s The Universal Sherlock Holmes, and, ultimately, with 1994’s multi-volume or electronic Universal Sherlock Holmes, edited by George Vanderburgh.* To enter the drawing to add this volume to your Sherlockian shelf, just send your answer in via blog comment or FB message!

Kristen Franseen is the winner of the bag of Holmesian goodies! For her “bad gifts,” she chose the box of salted ears sent by Jim Browner to Susan Cushing (“The Cardboard Box”), and the ivory box of tropical disease Culverton Smith sent to Sherlock Holmes (“The Dying Detective”). Others of you mentioned the 5 orange pips Elias Openshaw received from Capt. James Calhoun (“The Five Orange Pips”) and the “bequest” Jonas Oldacre made to the unhappy John Hector McFarlane (“The Norwood Builder”).