Screenshot from the British Newspaper Archive

Granada’s mention of Gamage’s nothwithstanding, we really don’t get a clear idea of how Holmes and Watson spent Christmas from the Canon. In “The Adventure of the Blue Carbuncle,” Watson (who is not living in Baker Street at the time) comes to pay his friend “the compliments of the season” on December 27th. Later, after the whole “bonnie blue egg” bit, they apparently share a meal featuring some sort of poultry. Was Watson married at this point (it depends on which chronologist you ask)? Did Holmes spend Christmas itself with family? And if so, was it just Mycroft, or did both brothers enjoy (endure?) a visit to the “country squire” branch of the family? Was the “bird” the erstwhile flatmates shared made specially for the occasion? Or was it (as seems more likely) leftovers, either from a celebration in town, or brought home from…wherever. I’ll be honest here and say that this is one reason why I believe that Watson was not a woman. If he had been, he’d have told us these absolutely crucial details.

Looking through the British Newspaper Archive for December, 1882, then, I tried my hand at deducing how our boys might have entertained themselves that Christmas. London had no shortage of available amusements, but I have to imagine that none of them would have appealed to Sherlock Holmes like the trial of Louisa Taylor for the murder of her elderly friend, Mary Ann Tregellis. Mrs. Tregellis, 82, and her husband, William, had taken Louisa, 36-ish, in after her husband (William’s co-worker in HM Customs) died in August of 1882. In the following two months, the Tregellises caught Louisa stealing and pawning their belongings, and Mrs. Tregellis’s health declined sharply. She was quick to make the connection between her sickness and her friend’s “care,” and was able to give a deposition enumerating her suspicions to a magistrate before dying on the 23rd October. An autopsy and other evidence backed up her testimony, and an inquest jury delivered its verdict of willful murder against Mrs. Taylor in November. Her trial, billed in the papers as “The Plumstead Poisoning Case,” was held at the Old Bailey in mid-December of 1882 and contained a good deal of graphically gory testimony from Guy’s physician Thomas Stevenson. Had Holmes attended, he would have seen Taylor convicted of “a cruel and treacherous murder,” and condemned to hang. Her sentence was carried out on 3 January, 1883, and she turned out to be the last woman executed at Maidstone Prison.

Later that month, he may have had his own poisoning case to deal with. Lloyd’s Weekly Newspaper of 31 December printed this account of an inquest held in Holmes’s own Marylebone:

Yesterday afternoon Dr. Danford Thomas held an inquest at the Buffalo’s Head tavern, Marylebone-road, on the body of John Maplestone, aged about 51 years, butler, in the service of Mr. Alfred Miles Speers, a merchant, of 13, Park-crescent. The lower part of the premises was frequented by a cat, and instructions were given to the deceased to destroy the animal. Some prussic acid was obtained, and a portion of it was entrusted to him, which he mixed with some fish oil. Later in the evening the housekeeper heard a thud in the basement, and sent down to know the cause. Soon afterwards the butler was found insensible, and expired in a few minutes. The jury returned the following verdict–viz., “That the deceased expired by poisoning from prussic acid, the deceased having drunk some from a bottle when he was attempting to poison a cat, but for what purpose, either of suicide or misadventure, there is no direct evidence to show.”

I don’t know about that one. What do you think, Holmes?

Yeah, I thought so.

Well, if you, like Holmes, love nothing better than a good murder to pass the time, then today’s prize is for you! Because it’s literally Christmas, I am offering a “True Victorian Crime Book Club”–3 books on actual 19th century murders, the first to be delivered in January, with the other two following in February and March. The featured books are as follows:

And to win them, you just need to answer this question:

Watson describes Holmes as being “well up in…poisons generally.” Name 3 times in which Holmes encountered murder by poison. List the story, the victim, the murderer and the poison.

As always, send your answers to me via blog comment, or FB messenger (either on the Well-Read Sherlockian page, or my personal page, if we are FB friends). Best of luck and watch your drinks! 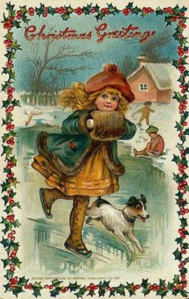 Our first winner is T. Rick Jones, who listed the visitors he saw in his and Holmes’s new sitting room during their first months together: Mr. Lestrade, “a young girl…fashionably dressed”; a Jewish pedlar; a slipshod elderly woman; an old white-haired gentleman, and a porter “in his velveteen uniform.”