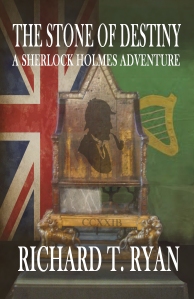 One of the great things about Holmesian pastiche writers is their ability to find problems for their favorite detective almost anywhere. Today’s author reveals one of the most interesting source for an idea that I’ve encountered yet, and does something that not one of my interviewees has done in the five years this blog has been around: he adds (and answers) a question of his own!  Read on, and then pick up a copy of  The Stone of Destiny. It releases on June 5th and should be available online, as well as in select bookshops–Manhattan’s Mysterious Bookshop among them.

An Interview with Richard T. Ryan:

How did you “meet” Sherlock Holmes?

I was a graduate student at the University of Notre Dame. One of the men in my dorm had a large book under his arm. When I asked him what it was, he replied, “The Complete Sherlock Holmes.” He allowed me to borrow it that night, and the next day, I went to the bookstore and purchased my own copy. The first book I had published back in 1987 was a Sherlock Holmes trivia book. Obviously, the fondness that I felt for Holmes is still there more than 40 years later.

What is your favorite Canon story, and why?

My favorite novel is The Valley of Fear. The whole notion of Holmes aiding an American agent and then delivering his own brand of justice is intriguing. Plus, I just love the story of The Valley of Fear.  As for short stories, certainly one of my favorites is “A Scandal in Bohemia.” Irene Adler is such a great character, and she obviously impressed Holmes. As a result of our shared fondness for her, I have a small homage to her in The Stone of Destiny.

What is your favorite movie or television portrayal of Holmes and Watson, and why? Were you inspired by any particular one of them?

Although I am quite fond of all the Basil Rathbone films, I like the “Hound” best because it is set in the proper period. Most of the Brett episodes are quite well done, but there are a few that seem to have lost their way. As for Watson, I am impressed with the intelligence that Jude Law has brought to the character in the Robert Downey Jr. films.

What inspired you to write this particular book?

The Stone of Destiny grew out of a “Final Jeopardy” question. The category was “British History,” and the answer was: “The only time the English-Scottish border was closed was in 1954 when this object was stolen.” The answer was the Stone of Scone (also known as the Stone of Destiny), and everyone got it wrong. That question rattled around in the back of my mind for a few years, and then it hit me. What if that weren’t the only time the Stone had been stolen? And what if the government tried to hush up the theft rather than publicize it? So, I guess I owe Alex Trebek a tip of the deerstalker for this book.

You can actually find an online account of this question at http://fikklefame.com/final-jeopardy-7-3-14/

Can you provide a brief synopsis of your book?

The book is set in 1901. During the elaborate funeral for Queen Victoria, a group of Irish separatists breaks into Westminster Abbey and steals the Coronation Stone, on which every monarch of England has been crowned since the 14th century. After learning of the theft from Mycroft, Sherlock Holmes is tasked with recovering the stone and returning it to England. In pursuit of the many-named stone, which has a rich and colorful history, Holmes and Watson travel to Ireland in disguise as they try to infiltrate the Irish Republican Brotherhood, the group they believe responsible for the theft. The story features a number of historical characters, including a very young Michael Collins, who would go on to play a prominent role in Irish history; John Theodore Tussaud, the grandson of Madame Tussaud; and George Bradley, the dean of Westminster at the time of the theft.

Stone of Scone (Under the Throne)

How closely does your book hew to canon? Why or why not? Was this a conscious decision, or did it just happen?

I think this is much closer to a Doyle tale than The Vatican Cameos. Watson serves as the narrator, and the story is linear, like The Hound of the Baskervilles. Moreover, The Stone is around 53,000 words, which is right in between the 43,000 of both A Study in Scarlet and The Sign of the Four, the 57,000 of  Valley and the 59,000 of  Hound. Robert Katz, the esteemed Sherlockian, suggested that if I were going to write pastiches, I should try to be true to the Canon in all respects, including length. I have tried to follow his advice.

What did you most enjoy about writing your book?

I loved doing the research. I tried to make everything as accurate as possible, from how fast a horse can trot, to the speed of trains and boats in 1900. I also researched all the items mentioned from newspapers available, from street names in cities to railroad and shipping lines in service.

Did your book require a lot of research? If so, did you uncover any especially interesting facts?

I came across any number of interesting facts, many of which play roles in the book. I don’t want to spoil any surprises, but I hope readers will find themselves saying, at least once or twice, “I never knew that!”

Can you share some of the reviews you’ve received for this book?

I sent Ken Bruen, author of “The Guards,” “The Magdalen Martyrs” and many other novels, as well as the creator of the Jack Taylor character (which can be seen on TV with Iain Glen in the title role) an advance copy. He was kind enough to say:

Sometimes a book comes along that absolutely restores your faith in reading. Such is the ‘found’ manuscript of Dr. Watson, The Stone of Destiny. Exhilarating, superb narrative and a cast of characters that are as dark as they are vivid. The machinations of the British political movers demonstrate why this manuscript was hidden for so long. A thriller of the very first rank.

WRS note:  Amy Thomas, Sherlockian author and a founding member of the BSB also got in touch with me about Mr. Ryan’s books. As this latest title won’t be released until 5 June, she hasn’t had a chance to read it, but had this to say about his previous Sherlock Holmes adventure, The Vatican Cameos (MX, 2016). 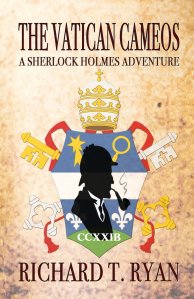 History buffs will enjoy Ryan’s detailed research. It’s clear he knows what he’s talking about, and when he brings in Michaelangelo and Leonardo, he’s just as confident as he is in Watson’s and Holmes’s characters. The action is paced swiftly, and the story moves along at an engaging pace.

Ryan’s world pulls the reader in, whether he’s with Italian masters or the Baker Street detective, and he expertly weaves together action that is hundreds of years apart. The Vatican Cameos is a very enjoyable take on one of those stories from Watson’s Tin Dispatch Box that he never quite had time to tell.

What is your favorite moment in this book?

To answer that would be to give away one of my biggest surprises.

Who is your favorite character in this book?

I think my favorite character is Eileen McMahon. As I said, I am fond of Irene Adler, and I had her in mind when I created the McMahon character. I hope readers will discern in her many of the same characteristics that make “The Woman” so memorable.

Are you involved in any Sherlockian groups?

I have attended meetings of The Priory Scholars, The Epilogues of Sherlock Holmes, The Copper Beeches and will be attending the next meeting of The Red-Headed League of New Jersey. I was also able to attend a few events at the most recent BSI convention in Manhattan.

When did you decide you wanted to become a writer?

I’ve always been a writer of sorts, having worked in magazines and newspapers for nearly 40 years. I had attempted a few novels over the years, as well as a play that was produced off-Broadway. Finally, I just decided that I was determined to finish at least one book in my life, and that turned out to be “The Vatican Cameos.”

What is your writing philosophy?

I try to create a situation and then just let the book lead me where it wants to go. In creating suspense, I have found that if I paint myself into a corner, eventually, and it make take some time, I will find a way of extricating myself.

Any advice for aspiring writers?

Just write. Don’t wait as long as I did to discover your voice because your voice can and should change as you do. I think I write with a certain maturity now, but I might have written much more passionately, had I started 20 years ago.

How would you categorize your book? Is it mystery, thriller, horror, romance…?

It’s best described as a historical mystery. It features Holmes and Watson interacting with various Victorian/Edwardian personalities such as Michael Collins, the Irish firebrand; Joseph Tussaud, grandson of Madam Tussaud, who ran the museum in London, as well as such groups as the Irish Republican Brotherhood, the precursor to the Irish Republican Army.

A young Michael Collins, c.1915, some time after his meeting Holmes.

What sort of reader is most likely to enjoy your book?

I think it appeals to Holmes fans, obviously, as well as those who relish history. I try to incorporate the facts into the narrative much as Dan Brown does, so that it seems a natural extension of the events rather than a preachy aside.

Where can readers get a copy of your book?

It’s available online at Amazon, Barnes & Noble, The Strand Magazine and MX Publishing. It will also be available at The Mysterious Bookshop in Manhattan.

And now, Mr. Ryan poses (and answers) his own question:

What concerns you most about the Canon?

My biggest fear is that with all the TV shows and films, such as “Elementary,” “Sherlock” and the Downey motion pictures, today’s younger audience may never come to fully appreciate the stories in the Canon. Although these adaptations are based on Doyle’s works, with some hewing much closer to the original than others, the simple fact remains that the 56 short stories and four novels are the wellspring. Younger Holmes’s fans need to understand that you ignore them at your own peril.

(The WRS adds her hearty agreement.)