Q: How did you “meet” Sherlock Holmes?

A: I first met Sherlock Holmes when my older sister took me to the opening weekend of the movie “Young Sherlock Holmes.” She wanted to see it and she was babysitting me, so I really had no choice. At eight years old, I was extremely impressionable and was immediately in love with Nicholas Rowe’s Sherlock. After that, I couldn’t get enough and became obsessed with the Canon and mysteries in general (let’s not even discuss all the copies of Encyclopedia Brown that still line the shelves of my childhood bedroom). I also began a lifelong love of all things Egyptian after that as well. 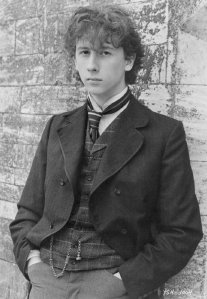 Yes, our pre-teen selves can see the attraction.

Q: What is your favorite Canon story and why?

A: The first Canon story I remember reading was Hound of the Baskervilles. I loved the spooky, supernatural feel of it that still colors my writing and reading preferences today.

Q: What is your favorite movie or television portrayal of Holmes and Watson, and why? Were you inspired by any particular one of them?

A: For years my favorite was Nicholas Rowe and Alan Cox in “Young Sherlock Holmes,” but then, after much prodding from friends who were saying, “ You have to watch the BBC Sherlock!” I gave in and became hooked in the first 5 minutes. Cumberbatch and Freeman are just so good—it’s just fascinating to watch. They managed to bring the Canon into the 21st Century, but those glimmers of the original characters are always there shining through. Not to mention that the cinematography and clever use of camera tricks to illustrate Holmes’s thinking is just brilliant. I would definitely say that I’ve been inspired by that version in my own writing. I love the clipped, irreverent, yet human tone of Cumberbatch’s Sherlock and I can’t help incorporating that in my dialogue. When I’m writing Holmes, it’s his voice I’m hearing, so I’m sure it colors the story. He also brings this leonine sexuality to Holmes that is just so much fun to play with.

Q: Can you provide a brief synopsis of your book?

A: Curious Incidents: More Improbable Adventures is the follow-up anthology to An Improbable Truth: The Paranormal Adventures of Sherlock Holmes (2015). Fifteen authors contributed stories of speculative fiction starring Holmes and Watson. Their only requirements were that they could not be in the original Victorian setting and they had to stay true to the character. So we have weird westerns involving dragons, cyborg Sherlocks, an alternate London plagued with vampires, dystopian futures—all keeping the essential characteristics of Sherlock Holmes and Dr. Watson intact. It’s a huge variety of stories that should satisfy both dedicated Holmesians as well as newcomers.

Q: Where did you get the idea for this book?

A: My husband and I were having lunch (he’s a big Sherlockian) and we were talking about how the vast majority of Holmes stories had been released from copyright. I was excited because of the possibility of the market exploding with new Holmes stuff and how I wished it wasn’t all pastiche. We came around to talking about how cool it would be to write a bunch of Holmes stories with that same supernatural feeling of Hound of the Baskervilles except at the end there would be no “Scooby Doo moment” where the mask was pulled off and Holmes gave us the perfectly logical explanation. My husband suggested that if that was the kind of book I wanted to read, then I should just put one together myself. And the rest is history.

Seriously. Why couldn’t have been a real ghost, just once?

Q: What is your favorite moment in this book?

Q: Did you find that using Conan Doyle’s characters made this story easier or more difficult to write?

A: My own story in the anthology, “The Final Solution,” (under my pen name Alexandra Christian) was challenging not because of the characters, but their circumstances. Sherlock is very limited in his physical abilities at the very beginning. He is only able to observe what he can see with a single cybernetic eye, so writing those deductions was very tricky.

Funny story: I wrote a Sherlock Holmes novella last year entitled Chasing the Dragon. Mostly as a challenge to see if I could write a romantic Holmes story. I think I pulled it off, but when I began writing it, I thought writing in 1st person from Holmes’s POV would work best. However, I had never considered how awkward it would be writing a sexy scene from his POV. Believe me when I tell you—it’s awkward. In that case, I had to go back and rewrite the whole story.

Q: How would you categorize your book? Is it mystery, thriller, horror, romance…?

A: Uhm… all of the above? As I said, it is a widely varied anthology that crosses many different genres. However, there is a mystery at the heart of each story.

Q: What sort of reader is most likely to enjoy your book?

A:  Readers that embrace all things strange and unusual. Readers that love it when their beloved characters push the envelope. I really think there’s something in both this anthology and An Improbable Truth for readers of every genre.

Q: Where can readers get a copy of your book?

A: Curious Incidents: More Improbable Adventures is available as an eBook and in print from Amazon, Barnes and Noble, and other retailers. The publisher website should take you there: http://mochamemoirspress.com/curious-incidents-more-improbable-adventures/