Well, if you live in the north eastern quarter of the U.S., you probably know that we are going to get snow. A lot of snow. Which means I have spent quite a bit of time in places that look like this: 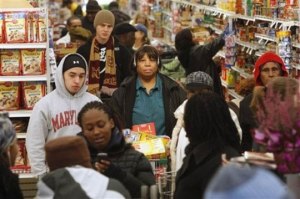 After last night’s adventure, you’d think I would stay in today and await the Flakes of Doom. But noooo, because even though I spent nearly three hours foraging with everyone else in town, I forgot stuff. Important stuff. Good thing there was plenty left.

Why were these not sold out? Don’t people know what Monday is?

Last year, my kids really liked baking a cake and bringing out the Sherlock Holmes action figure, then snuggling on the couch and watching a Granada episode with Mom. I didn’t want to break that nascent tradition just because of a few inches of snow.*

The Sherlockian world is full of traditions. Some are big–like the BSI weekend coming up in New York City. Others revolve around popular conferences or the airing of new episodes of a favorite show. Some are local–the Illustrious Clients’ Victorian Dinner, for instance. And others belong only to the individuals who cherish them. It’s good, I think, to have a little bit of all of these. If you’ve been feeling isolated out there with your copy of the Canon, or certain that no one around you understands your love of a particular film version of Lestrade, let me assure you that you are most definitely not alone. It make take a little searching (probably not as much as you think) but trust me when I say that there is a Sherlockian community out there waiting to meet you and include you in its own traditions. Let this be the year you make some new friends.**

And speaking of friends…and meditations on friendship mixed in with crime and archenemies and stuff….

As we are getting to the end of the 12th Night Giveaway, there are only two prizes left–and as they are the big ones (metaphorically speaking) everyone is eligible to enter again, whether or not you have already won. Today’s prize is the Season 3 DVD (or Blu-Ray) of Sherlock, Season 3. It has not yet been released, but I will pre-order it for you, via Amazon US or Amazon UK. As such, it will be either Region 1 or Region 2, so please be sure your player can accommodate either of these.

Oh, yes. The photo.
(via Sherlockology)

To enter the drawing, just answer this question:

Sir Arthur was a very chivalrous man, and while he seems to have respected women, he also shies away from making them truly wicked in the Holmes stories. Even if they do wrong, Holmes and Watson generally excuse them in some way. Except for (at least) two. Name one, tell us what she did, and give the name of the story!

Remember to send your answer in via Facebook PM, Twitter DM, or the blog comments! I will draw the winning name 24 hours from this posting. Good luck!

For the first time, we actually have dual winners of the dual prizes! Normally everyone goes for one prize! Both Regina Stinson and Emma Stanovska knew that Jabez Wilson of “The Adventure of the Red-Headed League” and Hall Pycroft of “The Stockbroker’s Clerk” fell for the trap of earning decent sums of money for simply copying things (the encyclopedia and names from “The Directory of Paris). They were not the only clients Holmes encountered who were drawn into dangerous situations for the promise of a high salary, however: other names submitted included Violet Hunter, Victor Hatherly, Neville St Clair, and the unhappy John Hector McFarlane. Remember, if it sounds too good to be true….

**You don’t have to even be all that social. I promise.