They forgot the second “i.”

A strange thing happens, come the day after Christmas. I’ve noticed it ever since I was a child. On December 26th, all of the shiny, glowing decorations which, just a day before seemed like festive beacons proclaiming joy and burning back the long winter nights suddenly become tired, tawdry and worn, pathetically garish against what will soon be the pervasive gray of a Midwestern January.

So much changes with the passage of time. Your hometown landmarks disappear, and those that remain seem smaller and sadder. The book that had you laughing your guts out at 9 isn’t that funny when you read it aloud to your own children. And disco…oh, who am I kidding, I still listen to that. 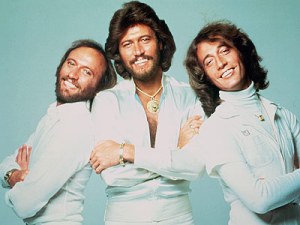 Because there are other things that outlast everything the years can fling at them. The BeeGees are still pretty darn awesome, and Sherlock Holmes…well, he survives in every imaginable permutation, as do those who surround him. Dr. John H. Watson, of course, but also Mycroft, Lestrade, Mrs. Hudson, Moriarty, Moran, and just about everyone who had dealings with the denizens of 221 B Baker Street. Thus, today’s question….

Which Scotland Yard inspector consults Basil Rathbone’s Sherlock Holmes in The Woman in Green? Where can he be found in the Canon (at least one story)–and in the 21st century?

I know, I know, it’s a lot of work for the day after a holiday…or any Thursday, really. But the reward should be worth it. This is our first 2-winner prize. First, the non-BBC offering:

I kid you not, I almost kept this one for myself. Most of the time when I search on eBay for Sherlock Holmes-related photographs, those I find (in my price range, anyway) are actually very nice prints of actual photos, and not the photos themselves. This one is different. It’s from a press kit promoting Basil Rathbone’s appearance in 1939’s The Sun Never Sets.*  It has the handling marks you’d expect from an old photograph, as well as some yellowing. The picture shows a Rathbone in a houndstooth suit, sitting down with two of his dogs, one of which is licking his face. The other, in the foreground, is a little blurry. On the back are a barcode sticker, some pencilled notations, and a blue typed sheet of paper, glued on, which reads:

“Basil Rathbone easily ranks as one of Hollywood’s leading canine lovers and always has from four to seven dogs around his spacious Hollywood home. Of them all, however, his favorite pets are a white pit bull terrier and a Black Belgian police dog with whom he is shown playing on his first day at home after finishing his latest Universal picture, ‘The Sun Never Sets.’ Rathbone stars with Douglas Fairbanks, Jr. in [it ends here]

It also includes a source, John Joseph, for Universal Studios, and says it is “For release upon receipt.”  The photo comes with a Certificate of Authenticity (COA).**

And for you BBC Sherlock aficionados…. 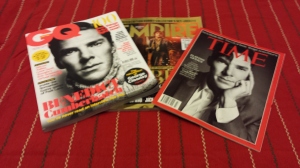 The camera could barely contain them.

It dawned on me at some point that the easiest way to collect Sherlockiana was to get it new–and in multiple copies, so you can both hedge your bets and share the wealth. So, that’s the European Time with Benedict Cumberbatch on the cover on the right, Martin Freeman as Bilbo Baggins in Empire  there in the middle, and Cumberbatch again on the left, in January 2014’s British GQ.

Again, just a reminder of the rules: 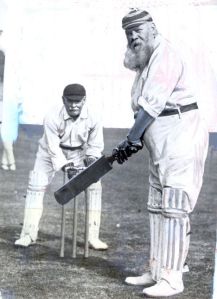 W.G. Grace. The beard is for faking out his opponents.

Today’s winner of the Rathbone script is Kristin Franseen, who knew that Conan Doyle was proud of bowling out W.G. Grace, considered one of the world’s best cricketers–ever. She also knew that he was quite proud of introducing skiing (once only a Scandinavian activity) to Switzerland in Davos, where he and his first wife travelled frequently in hopes of improving her health. Congratulations, Kristin!

**FYI, COAs are not always trustworthy, as anyone who watches antique or pawn shows on television will know.  But this one looks pretty genuine.  Also, the COA reminds you that just because you possess the photograph, doesn’t mean that it is in the public domain. The copyright may still be in force. Assume that it is and do your research.