Ages ago, in 1995, I checked out a book at the library that both disturbed and engrossed me to the point that I can still remember large snatches of it almost twenty years later. The book? Dr. William R. Maples’ account of his work in forensic anthropology, Dead Men Do Tell Tales, filled with the most graphic, fascinating stories of death and detection, both historic and modern. I consumed it, even as it horrified me.* The recent explosion of popular fiction (The Body Farm; Patricia Cornwell’s Kay Scarpetta series) and television programs (CSI, almost everything on Discovery ID) using forensic detection as their basis shows that I am not alone. There is something particularly enthralling, apparently, about stories where criminals are captured not because they’re  caught in a lie, or given up by a disgruntled partner, but because the objective evidence of rug fibres, blood spatter, gunshot residue or a broken hyoid bone are more eloquent than the testimony of a dozen human witnesses.

Our Victorian and Edwardian counterparts were no different. They had plenty of mystery stories, gothic tales and lurid accounts of true crime to enthrall them, but they still found something particularly fascinating in the stories of a detective and his physician companion who went after criminals armed, not only with a revolver, but a knowledge of science and the ability to use it in novel, practical ways. 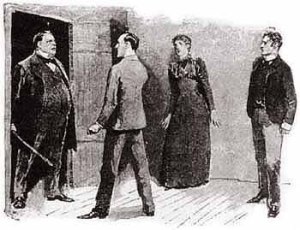 Stand down, sir! I have science, and I am not afraid to use it!

Dr. James O’Brien, Distinguished Professor Emeritus of Chemistry at Missouri State University, possesses impressive academic credentials and has received several awards for both teaching and research.  His interests (pre-retirement) included “molecular orbital calculations of the properties of organometallic and inorganic species, ” and he’s now dedicating his time to the history of chemistry, studying the Civil War, and, naturally, his lifelong passion for Sherlock Holmes. He’s both written and spoken on Holmes as a chemist, and delivered over 120 lectures on the subject, as well as taught a college course on the detective in his own city of London.** 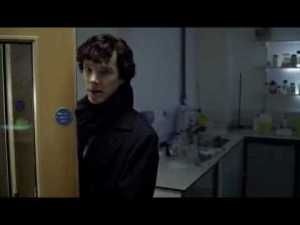 “Enough to be going on with, don’t you think?”
(Sherlock, BBC One)

Dr. O’Brien approaches his subject as he doubtless would a college class or an academic paper: he starts with the basics and builds on them to an interesting, possibly inescapable, conclusion (more on that later). The first chapter is a discussion of Holmes’ genesis as a literary character, including a detailed comparison of the Great Detective and one of his predecessors, Edgar Allan Poe’s C. Auguste Dupin.***  The reader is then given thorough introductions to the major canon characters, including their scientific backgrounds (where applicable) before the exploration of science in the canon begins in earnest.

O’Brien divides the three remaining chapters between forensics, chemistry, and “other sciences” (physics, mathematics, biology, etc.).  In each, he is unbelievably thorough. Typically beginning with  examples taken from real-life cases from both history and recent memory (Alger Hiss, Ted Kaczynski, Benedict Arnold) and segueing over to Baker Street, O’Brien teaches the reader about the past and present uses of finger printing and footprint analysis in police work, the 19th century shift between inorganic and organic poisons, substitution cyphers, why we should doubt someone’s ability to identify bones, and what, exactly, is meant by “the rule of three.” In one of my favorite sections, he systematically demolishes all but a couple of Isaac Asimov’s accusation that Holmes was “a blundering chemist” by actually making the effort to go back to the sources the Great Detective would have had available, discovering what he would have known, and the terminology he would have used. The problems which remain afterwards are not, to my mind anyway, very serious, and could well be laid at the feet of a Boswell with a deadline and dubious memory.

Some, however, may find the book’s thoroughness distracting. Aside from the aforementioned character descriptions,  O’Brien retells the stories which feature the methods being discussed, sometimes at length. Realistically, this is inevitable. How can we understand how Holmes interprets movement through the study of footprints without an example from “The Resident Patient,” for example? And, let’s be frank: Holmes was slightly justified when he criticized his friend’s first literary venture,  A Study in Scarlet, thusly:

Honestly, I cannot congratulate you upon it. Detection is, or ought to be, an exact science, and should be treated in the same cold and unemotional manner. You have attempted to tinge it with romanticism, which produces much the same effect as if you worked a love-story or an elopement into the fifth proposition of Euclid.†

Of course, Watson was writing accounts of their adventures, not a forensics textbook; doubtless quite a few scientific particulars were lost on the editing floor or smudged for effect. For the student of Sherlockian science, however, that leaves very little detail to work with; The Scientific Sherlock Holmes is not very long. Without story summaries, we would be left with little more than a short monograph. The impatient reader must also understand that, well, not everyone is a Sherlockian (or has the canon memorized) and other readers are bound to be newly-minted, or even just interested in science. As a college professor accustomed to working with students of varied ability and background, Dr. O’Brien must walk the tightrope of providing enough background for the novice, sprinkled with the details that keep the rest of the class interested. For the most part, he succeeds, although I did find myself skimming on occasion.

O’Brien’s scholarly background is also evident in his writing style. My husband and I have often discussed the difference between academic writing (dry, choppy, boring) and the writing people tend to enjoy (good sentence flow, development, interesting presentation).†† Don’t get me wrong–The Scientific Sherlock Holmes is far from boring–but, particularly in the first few chapters, the short sentence structure and word repetitions were distracting. At first I wondered if this was an editorial issue; then I realized that it was probably due to the fact that Dr. O’Brien is a scientist, not a novelist, making stylistic differences inevitable. Interestingly enough, by the third chapter, I didn’t notice those quirks nearly as much. Perhaps I just got used to them, or perhaps (as I’ve seen happen in fiction) the writer simply relaxed into his book, and this ease was reflected in the writing itself.

In keeping with its subject, The Scientific Sherlock Holmes is easily one of the best-documented books I’ve read on the Great Detective. Rather than using footnotes, O’Brien places citations in the text, academic journal-style, which is a little distracting, but visually manageable. His bibliography, if you like such things–and I do–is a thing of beauty. Occasionally, the reader might take issue with his conclusions. I was not, for example, convinced that Doyle borrowed from Poe in every instance cited, as much as he simply used popular plots (buried alive, anyone?) that reliably jangled 19th century nerves. The only factual problem I found was O’Brien’s misuse of the term “Great Hiatus,” the period during which Holmes was presumed dead (1891-1894), in referring to the decade during which Conan Doyle (or Watson, if you prefer) didn’t publish any stories, 1893-1903.†††

These criticisms turn out to be minor in the end, however, particularly when weighed against the book’s final conclusion, which I found fascinating. Throughout The Scientific Sherlock Holmes, O’Brien quantifies the times Holmes uses a certain investigative technique–how many times he gets out the magnifying lens, for example, or the number of instances he gets intimately acquainted with the prints in a carpet. Nearly without exception, the examples of Holmes relying upon science for his deductions occur in his early, pre-Hiatus career. Quite a few readers have remarked that the detective seems to have undergone some kind of essential change during his time away; the man who returns from Reichenbach is not the same man who appeared to go over the Falls. For O’Brien, the answer is simple: the change was not in Holmes, but in his creator and his growing fascination with spiritualism: “…Conan Doyle was now less of a physician and man of science, and so was Holmes.”‡ 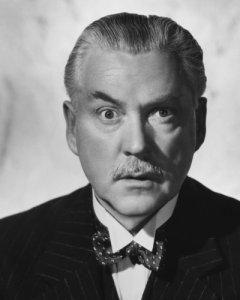 Some of the later stories, such as “The Illustrious Client,” are wonderful examinations of darker human nature, but when Conan Doyle made Holmes a scientist, he made him something unique and special for his times. Most Sherlockian writers point out that one element of Holmes’ eternal appeal is that we readers believe that we could do what he does, if only we were just a little bit smarter. This is true–which of us hasn’t tried to deduce the background of the person ahead of us in the post office line–but there’s a little more involved. As human beings, we crave certainty, but are often forced to make do with something rather more unsatisfying. In science, we seek, along with our Victorian counterparts,  a comforting exactitude,  a sense that we can control our fates and know the truth, if we just learn enough. As Sherlock Holmes gathers up all of the seemingly trivial information at a crime scene and applies his superior reasoning abilities and encyclopedic scientific knowledge, we have every expectation that he’ll find the answer and justice will prevail.‡‡  The people who read Holmes’ adventures as they appeared in the Strand, or Collier’s or Harper’s  and even Liberty, had every expectation that science would improve their lives. And it did–through steam, then electricity; through telegraphs and telephones; through medicine and food preservation and a thousand other developments and discoveries.  When those people queued at the newsstand every month to see what Dr. Watson had to say about his friend’s latest triumph (and usually they were triumphs, “Norbury” notwithstanding), they got a glimpse of how science could also make life safer. In The Scientific Sherlock Holmes, James O’Brien expertly isolates fact from, well, the more romantic compounds, to show us how one exceptionally brilliant man, often armed with little more than his wits, a lens, and science, was able to restore order both to his world and even, through his methods and examples, to our own.

The Scientific Sherlock Holmes was awarded the prestigious Edgar Award for Best Critical/Biographical Book in 2013. It is available in hardcover and ebook form, from both online and traditional booksellers. As far as I know, Dr. O’Brien does not have a blog or public social media account at this time.

*It’s on Kindle. I just bought it. I will probably go right to the awful story about the septic tank.

**http://www.usi.edu/science/chemistry/inky/speakers/obrien04.htm, and http://www.diogenes-club.com/obrien.htm, as well as the dust jacket author bio.

***It’s an interesting approach, comparing a real person to a fictional character, don’t you think?

††My husband believes that I need to switch the two descriptions. “Brevity is the soul of wit,” he quoted at me, “and you lack a sense of humor.”