Well, we’re in the home stretch now, but remember, the game goes on until January 6th, because I just had to include Christmas Eve….  Also, because the January 6th prize is really kind of exciting, I’ll be lifting the “you can only win once” rule for that day, so everyone can participate.  Hopefully you don’t all own it yet!* 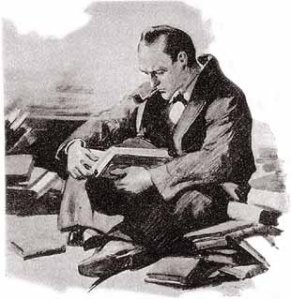 Amazon Delivery at 221B

But, as today has enough trouble of its own….**

Let’s start the New Year off right with a little Basil Rathbone and Nigel Bruce. I’d never seen the Rathbone/Bruce movies until this (now past) year, although I vaguely remember hearing my father talk about seeing them when he was a boy. My husband prefers the quieter, more cerebral Rathbone; couch-jumping and coffee-table stepping don’t fit his idea of the Great Detective, and he is immune to the charms of floppy hair and Belstaf coats. Although most of the Rathbone films take place in the 20th century (the Victorian ones are my favorites), the main characters are recognizably Holmes and Watson, and while we know that Watson wasn’t bumbling, as Nigel Bruce plays him, the actor’s portrayal is so charming, innocent, and incredibly loyal, that it’s easy to forgive him tripping over everything, or telling a story using vegetables. 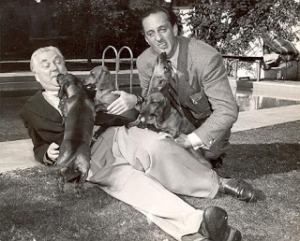 Is Basil Rathbone your Holmes? Then today’s prize is for you! On offer is a promotional photo (unautographed, sorry) of Rathbone and Bruce in costume. I like it because, while Bruce has his customary “what-was-that-noise” face, Rathbone is looking right out at you, vaguely amused. You can be entered to win (and be the envy of all your friends) if you can answer this question. It might require a little digging:

Which bizarre villain in the Rathbone/Bruce film, “The Pearl of Death” is echoed in BBC Sherlock (name or describe the character in each)?

As always, send your answer via the blog comments section, or PM on FaceBook (I’ve had some trouble with Twitter DMs). Happy New Year!  May your 2013 prove your best year yet–but not your best year ever! 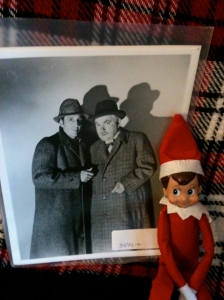 John has faith that you can find the answer!

Congratulations to Joe Riggs, who knew the rather disgusting fact that, to a medical professional, a carbuncle is a skin infection, larger than a boil, which has roots deep in the skin and involves…pus.  As far as I can tell, they’re not blue.

*Who am I kidding? I’ve seen photos of your bookshelves….

**Want to see some more?