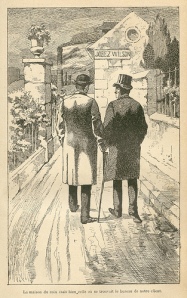 “We wouldn’t have had to walk if you hadn’t deleted the location of your car keys, Holmes.”

It is well-known that Sherlock Holmes has a prodigious memory. Both through scrupulous attention to his “brain-attic,” (“mind palace” as it’s known to the BBC crowd), and “a strangely retentive memory for trifles,” he’s able to quickly recall the details necessary to solve his cases.* Being married to a physician, I am also certain that Dr. Watson was no piker in this area himself. Even in the 19th century, doctors had to be able to access enormous amounts of information in an instant.

Well, bully for them. If, however, you consistently plan two events for the same exact moment in time; had to tell your doctor that at once-a-week medication was too much of a challenge; and lit a candle, did dishes, put away laundry and looked at the mail before you remembered you initially got up to feed the dog…well, this prize is for you.**

Up for grabs today is a set of eight Holmes-related magnets. There are two Paget illustrations, one Frederic Dorr Steele, a Frank Wiles, three BBC Sherlock selections, and one photo of Conan Doyle in a boater. Just the thing you need to hold onto those important reminders, fill up that gap on your refrigerator, plus, it looks so much better than the stuff you get from plumbers and real estate agents. To qualify for the drawing, just answer this question:

What truly depressing advice does Mycroft Holmes give Sherlock on Christmas Eve?

(Hint: Try the Emmy-nominated BBC Sherlock episode, “A Scandal in Belgravia” for your answer)

Again, leave your answer in the comments, or PM me (Facebook) or DM me (Twitter), and I’ll put all the correct answers in the basket for tomorrow’s drawing. Best of luck!

Congratulations to Kathleen Kaska, who knew that both Professor Challenger and Brigadier Gerard had their chance to become matinee idols!

*Holmes tells Watson about his “brain attic” in “A Study in Scarlet,” and uses his memory of, well, something trivial (no spoilers!) to solve the case of “The Lion’s Mane.”

**I in no way resemble tha–SQUIRREL!!