Well, it’s October, the time of year when many of us are thinking about jack o’lanterns, hay rides, bonfires, ghosts, goblins, and….snowmen?*

I know, I know, I’m not ready for snow yet, either. But that was before I got the marvelous opportunity to review David Ruffle’s new children’s book, pre-publication. A prolific writer, Mr. Ruffle now has six published books featuring Holmes and Watson to his credit, and is finishing up the seventh. Most of his books are intended for older readers; Sherlock Holmes and the Missing Snowman, however, is meant for a younger audience–much younger.

If you think about it, as ubiquitous as Sherlock Holmes is in our culture, it’s rare to find him in children’s books. When we do see him, he’s often doing a cameo (as in the Basil of Baker Street series), or in “disguise” as a dog, a muppet, or a 12-year-old detective operating out of the family garage. A picture book featuring Holmes and Watson in their human, canonical form is, therefore, a truly welcome development!

You may have actually read The Missing Snowman before, in its original form: the short story “Henrietta’s Problem.” First written in response to a holmesian.net Christmas story challenge, and then appearing as a chapter in Ruffle’s novella and short-story collection, Sherlock Holmes and the Lyme Regis Horror, the little piece garnered enough consistent praise that the author thought it might make a good children’s book. 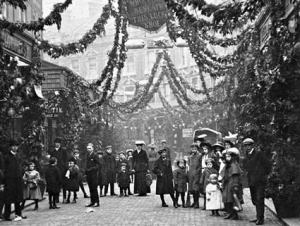 The story is a simple one. Holmes and Watson are lounging about at 221B, one day near Christmas. They’ve been kept in by a two-day snowstorm (and, presumably, no cases), and Watson’s eager to go out for a walk. Holmes isn’t having it; perhaps it’s fortunate that their discussion is interrupted by the doorbell.

This is not your typical Baker Street supplicant, however. Their prospective client is Henrietta Fortescue, a five year-old girl who’s lost someone important. After spending the beginning of her short life in a hotter climate, she was thrilled to see snow for the first time, and built a large snowman, just as she’d seen in books–only to find him gone now that the sun’s come out.

Possibly a bit testy because Holmes won’t go out, or because his war wound is acting up, Watson informs Henrietta that Sherlock Holmes is a busy man of affairs, and is about to remind everyone of the impact heat has on frozen things, when his friend interrupts him and agrees to take the little girl’s case. What follows is a simple, touching story that reminds us that, no matter what he wants others to think, the Great Detective is much more than a logical machine.

When I heard that Mr. Ruffle was going to publish “Henrietta’s Problem” as a children’s book, I figured he’d just cut the text into smaller chunks, take out some words and be done with it.**  Instead, he’s re-written the story to a child’s level, without losing any of its original charm. In fact, after reading back through the original, I actually think that this simpler version is the best. Mr. Ruffle has a gift for expressing emotion without a lot of verbal clutter, and it’s used here to great effect. The Missing Snowman reads out loud extremely well (more on this in a minute), and Lyme Regis artist Rikey Austin’s soft, nostalgic illustrations, done in a light, wintry palette, add to its gentle mood. 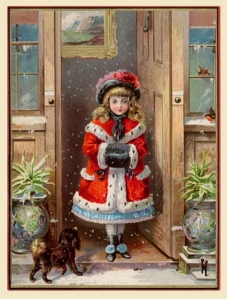 Of course, we all know of children’s books–picture books in particular–which adults love, but children find boring. Having been blessed with three little people myself, I thought I’d give The Missing Snowman a field test. My kids are 10, 9, and 7–the first two a little older than Ruffle’s target audience, but since they still enjoy being read to, I figured they’d do in a pinch, so we snuggled up on the couch before bedtime. Here are their reactions:

Daughter, 10: “Sherlock Holmes is like a mysterious character. He likes kids and talks to them so they can understand things.”

My kids can be squirrely; they are not at all “the sitting-down type.” Their preferred reading material usually involves fantastic adventures or very broad humor. In other words, I was concerned. The Missing Snowman, however, kept their attention. They understood what Holmes does to solve Henrietta’s problem, and why he gives his young client the explanation he does at the end of the story. They especially appreciated the bits of humor; everyone agreed that the bit in which Holmes interrupts Watson before he mentions m-e-l-t-i-n-g was their favorite.

My kids are young. To them, the holidays are still magical, and it’s fun to try to create special memories for them. As a parent, however, I’m very conscious that a lot of what’s out there glorifies the material aspects of this time of year. Someone is always “saving Christmas,” which pretty much means “making sure there are presents.” There isn’t much about giving, and if there is, it involves…presents. In The Missing Snowman, Holmes, who was never a father, still knows how important it is to preserve a little girl’s sense of wonder, to let her keep her childhood just a bit longer. Henrietta, for her part, learns to show gratitude by giving up something which has meaning for her. In keeping with canon, there’s no emphasis on religion; the book is appealing whatever your views on the subject. For children, the book is about kindness. However, in its gentle way, Sherlock Holmes and the Missing Snowman also reminds us adults that what may seem trivial to an adult is essential to a child and that, to modify Holmes’ advice to Henrietta, “Your children will not be with you for very long. Enjoy them while they are here.”

Sherlock Holmes and the Missing Snowman has an official release date of November 28, 2012. It will be available in either print or e-book form, and can be had from your favorite online bookseller, or directly from the MX Publishing site. I plan to do a giveaway from my Facebook page once the book is released, so be on the lookout! David Ruffle is on Facebook, and keeps a regular blog at http://storiesfromlymelight.blogspot.com/

Star Rating: 5 stars out of 5 “This is a wonderful book that gets it right.”

*Unless you’re my kids. Then you’re thinking about candy. Legend has it that in the next neighborhood over, they give out full-size chocolate bars.

**We won’t talk about how silly this is.